Lay It On Down 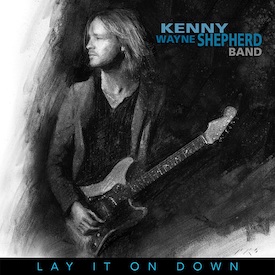 “I wanted to make an album of great American roots music, and the end result is something that I’m really pleased with.” Kenny Wayne Shepherd says of the Kenny Wayne Shepherd Band’s hard-hitting new release Lay It On Down. “I wanted to play to our strengths, but I also wanted to make an album full of music that people haven’t heard from us before. I’m pulling from a lot of different periods and genres on this one. I wanted to strike a balance between the heavy emotional stuff and the stuff that will put a smile on your face. A new album should feel new and refreshing, and this one definitely feels that way to me.”

More than two decades into a recording career that began when he was 16, Kenny Wayne Shepherd has built a powerful reputation as a visionary recording artist, a riveting live performer and one of the most talented and distinctive guitarists of his generation. He’s also earned his stature as one of the contemporary blues world's leading lights, standing at the forefront of a widespread revival of interest in the blues.

Lay It On Down’s ten original songs explore some vital new creative territory while embodying the same raw, rootsy musicality that’s been a common thread in the nine acclaimed albums that Shepherd’s released since he first emerged as a teenaged guitar wunderkind nearly a quarter-century ago. “I wanted to touch on all of the different musical influences that I’ve had over the years,” Shepherd says. “With solid grooves, strong lyrics, good stories and a lot of different sonic textures.”

Shepherd wrote all of Lay It On Down's songs, with a variety of co-writers, including longtime collaborators Mark Selby and Tia Sillers, and noted tunesmiths Dylan Altman, Brian Maher, Danny Myrick and Keith Stegall.

“For about two years, I’d make trips to Nashville every chance I got to write songs with different people,” Shepherd explains. “When you’re writing with someone else, it’s inevitable that they bring something different to the table, something that I might not have thought of myself. So in an effort to grow as an artist and as a musician, I wanted to write with some different people and see what would come of that. It was kind of a roll of the dice, but it worked out really well, and we got a good mixture of songs from these different collaborations.”

Lay It On Down is the second consecutive album that Shepherd’s recorded in his hometown of Shreveport, Louisiana. There, he, his band and co-producer Marshall Altman, along with various guest players providing horns and pedal steel guitar, cut the tracks with an eye towards looseness and spontaneity.

“There were no rehearsals or anything, we just went into the studio and set up and ran the songs down,” says Shepherd. “We all played together in the same room, recorded to two-inch tape and did as few overdubs as possible, just trying to keep it as organic as we could. The stuff that we do is very instinct- oriented and feel-oriented, and it's about capturing moments that happen between people, and you can only get that by actually playing together and letting the creative process flow.”

Recording in Shreveport, according to Shepherd, was a positive influence. “(2014's) Goin’ Home was the first record I had ever recorded in my home town, and I just enjoyed it so much,” he says. “There was something special about making music in the place where I first discovered music, and where I learned how to play guitar. Also, it’s nice waking up and seeing my kids’ faces in the morning, then going to make some music, and then coming back to my own bed instead of a hotel room.”

The deeply-ingrained musical passion that powers Lay It On Down has driven Kenny Wayne Shepherd ever since he taught himself to play guitar at the age of seven, learning classic blues tunes by meticulously studying his dad’s record collection. Since then, his albums have sold millions of copies worldwide and received five Grammy® nominations and two Billboard Music Awards, as well as a pair of Orville H. Gibson awards, the Blues Foundation's Keeping The Blues Alive award and two Blues Music awards. He's also scored six #1 blues albums and a string of #1 mainstream rock singles.

Shepherd was just 16 when he burst onto the national scene with the release of his 1995 debut album Ledbetter Heights. His relentless touring and success on rock radio helped to drive the album to Platinum sales status. His 1998 sophomore effort Trouble Is... also went Platinum and gained a similar level of radio airplay.

1999’s Live On and 2004’s The Place You’re In were similarly successful, and were followed by 2007's ambitious CD/documentary project 10 Days Out: Blues from the Backroads, for which Shepherd and his band traveled throughout the American South to record with such blues icons as B.B. King, Clarence “Gatemouth” Brown, Hubert Sumlin, Pinetop Perkins and David “Honeyboy” Edwards.

2010 saw the release of Shepherd’s long-awaited first live album, Live! In Chicago, recorded at Chicago’s House of Blues during the all-star Legends tour. The live disc debuted at #1 on Billboard’s Blues chart, as did 2011’s How I Go. Shepherd then delivered one of his most personal projects to date with 2014’s Goin’ Home, on which he revisited a dozen of the vintage blues classics that originally inspired him to pick up the guitar, with help from an all-star assortment of friends and idols.

In 2013, Shepherd became one-third of blues-rock supergroup The Rides, with legendary veterans Stephen Stills and Barry Goldberg. The Rides continues to tour extensively, and have released two acclaimed albums, Can't Get Enough and Pierced Arrow, that further illuminate Shepherd’s depth and versatility.

“I think I’ve matured a lot in the time since I started recording,” Shepherd concludes. “I’ve learned a lot about subtlety, and I’ve learned to lay back a little bit. I still like to burn and I still like to get down, but I've also grown to understand the value of space, and the value of allowing songs to breathe. I don't feel the need to prove to everybody how fast I can play or how many notes I know. With whatever I’m playing, my goal now is just to try and touch the listener inside. Music is a powerful thing, and it’s important to me to do something positive with it.”