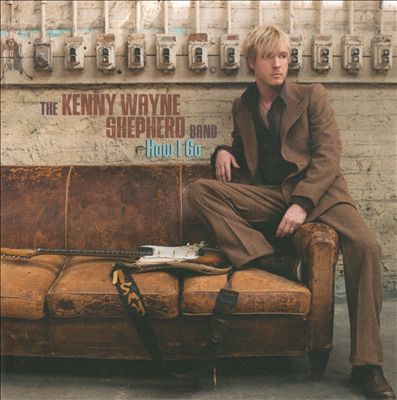 Kenny Wayne Shepherd's How I Go not only serves as a strong reminder of the chops that caused Guitar World to place him right behind B.B. King and Eric Clapton on their list of blues guitarists, but it's the strongest indication yet of his gifted songwriting talent. The album pairs Kenny's deeply soulful and impassioned takes on classic material like Bessie Smith's "Backwater Blues," Albert King's "Oh, Pretty Woman" and The Beatles "Yer Blues" alongside the strongest writing and co-writing of his career thus far.

Let's not forget that Kenny co-wrote "Blue on Black" very early on. The song was #1 on the Rock Charts for 17 consecutive weeks. All of the accolades heaped upon his playing are well deserved and well earned. But there is so much more to offer.

"At this point, most people who know about me know I can play guitar," Shepherd says. "As far as my approach to guitar on this record, it's not about showing people how much I can play. It’s about really choosing the right notes and playing them at the right times so that every note penetrates people, and they feel it inside and it’s not just some fleeting thing that just goes right by them.

"I wanted to be conservative, and selective, and tasteful in the solos that I did," he adds. "I wanted to concentrate on the song as a whole: the vocals, the arrangements, so every instrument that is being played contributes to the song and takes it to a better place."

Where Ledbetter Heights (1995) was a little more bluesy; Trouble Is… (1997) offered more blues based rock; Live On (1999) took a turn to more blues based rock; The Place You're In (2004) went straight ahead rock and the 10 Days Out (2007) documentary exemplified the best of straight blues, Kenny says this one "falls right down the middle between blues and rock."

"Never Lookin' Back" is a rocking song that sets the tone for album, with lyrics about moving on and rolling with life's punches. The song "Cryin' Shame" has that straight Texas shuffle longtime fans love to hear from Kenny and his band. "Show Me The Way Back Home" is a powerful blues ballad for the ages. "We hit a really great balance," he says of the album, which he co-produced.

"Who's Gonna Catch You Now?" is a very personal song. "I've become a father over the past couple of years. It's about a parent accepting what it's like to be a parent and having to accept a certain degree of powerlessness. It's just learning about acceptance. If you're a parent, it will pull on your heart strings for sure."

The hard-rocking, blues-based, guitar-driven album sounds young, it sounds fresh. Yet it has that distinctive energy and vibe drawn from the deep heritage of the genre. Kenny Wayne Shepherd is growing as a songwriter, musician and producer. Which isn't to say he's not proud of his past. "I don't have any regrets, other than maybe a couple of outfits that I wore on stage," he laughs.

"My approach from day one was that I was not going to record anything that I couldn't completely wrap my mind around and that I wasn't prepared to play for the rest of my career. As a result of that approach and not letting anybody talk me into doing anything that I didn't want to do, and nobody forcing me to record anything I didn't want to, I've got a body of work that I'm proud of. I still enjoy playing all of the songs off my first album. They are as much fun to play today as they were in 1995 when that album came out. I'm not one of those guys who doesn't want to listen to his own music. I don't go around listening to it all the time, but, my thing is, if I'm making music that I don't want to listen to, then why am I making music? I enjoy what I do. I have a lot of stuff that I'm proud of. Every album that we've done I've tried to do different things. I've never wanted to be an artist where people could predict what was next."

The name "Kenny Wayne Shepherd" is absolutely synonymous with "young blues guitarist" but that phrase isn't the totality of his person.

"Blues player is definitely one of the labels I've accumulated, because I'm a huge blues fan and I love to play the blues," he says. "But if you listen to my music, especially over the course of my career, everything that I do is not blues. It's the foundation of what I do, but my stuff has a lot more of an edge to it. It's a little more contemporary. And there's a certain youthfulness to what I do. I started writing and recording music when I was a teenager and that energy has been consistent throughout my career."

Last year's Live in Chicago! captured epic performances from Kenny and an assemblage of living legends in the blues world. Kenny's incredible presence and perpetually giving performances, designed to get every person in the room on their feet and to leave them smiling, are all of the evidence one needs to determine that he'll continue to do this for decades to come - just like his heroes.

"I’ve got a lot of a career left ahead of me and a lot of records left to make," he says. "I’m hoping to be playing music when I’m in my 80’s like B.B. King. I’ve got a lot more songs left in me to write and record. My fans want to hear new music, they want to hear new albums, and then when they hear a new record they want to come out and hear us play that stuff live."

Kenny Wayne Shepherd is very cognizant of the emotional role music can play in the lives of his listeners. He's in awe of that responsibility and works hard to bring happiness to people with his considerable gifts. With that said, he's bound and determined to be remembered as a guy who just straight-up kicked a lot of butt. "I get up on stage every night to play my heart out and to try to turn people on their ear, man. I want to bring light into people's lives with my music. If I can make people feel good for an hour and a half to two hours and forget about whatever might be stressing them out, then I'm doing my job."